Records Of The Moment / Momentaufnahmen

On the Present of History 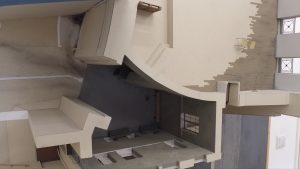 Adorno described the texts „Berliner Kindheit um 1900“ by Walter Benjamin as “Momentaufnahmen” snapshots – records of the moment- and fairytale photographs. In a growing collection of film fragments, which depict Berlin places in space and time, MOMENTAUFNAHMEN attempts to approach Benjamin’s view between Historical Materialism and the Messianic impulse, or, between analysis and ghostly metaphysics. The subtitle “On the Present of History” refers to the topicality and utopian potential of Walter Benjamin’s theses on history.

Records of the Moment /Momentaufnahmen is sketching a Benjaminian kaleidoscope of Berlin. The result is an eerie Berlin film. The german philosopher Adorno once described Walter Benjamins Berlin texts as records of the moment or fairytale photographies. In a growing collection of film fragments, which depict Berlin places in space and time, this film essay attempts to approach Benjamin’s view on Berlin between historical materialism and the messianic impulse, somehow between analysis and ghostly metaphysics.

The fragments reveal layers of geology, coarse-material architecture and subtle mythology. Walter Benjamins thesis on the concept of history, read by Benjamin expert Thomas Martin and an innocent teenage girl add a level of discourse and consciousness to the places chosen.The fragments analyze squares and monuments, some well known, some non-places under historical and actual conditions.
The Reichstag fragment for example consists of a super8 film of the Christo project Wrapped Reichstag back in 1994 and footage of a QAnon-right wing-anti Corona demonstration in 2020, that finally led to the storming of the Reichstags steps.

The film collection was produced in connection with Modell Berlin. Modell Berlin is a literature- art- media initiative, which wants to transfer the work of Walter Benjamin Passages from Paris to Berlin. The work will become visible in a series of exhibitions and events, the first part of which took place in September 2020 in the St. Matthäuskirche at the Kulturforum. The project was initiated by the writer and Brecht Benjamin expert Thomas Martin.

a film about a city, full of history, in the mood of Walter Benjamins historically materialism. History is not a mere chain of events, but moments with utopian and revolutionary potential. The film was produced for a series of events called “model berlin”, an attempt to translate the Parisian Passages work of Benjamin to Berlin, initated by the Brecht Benjamin expert Thomas Martin who appears in the film, reading texts by Benjamin. The term “model” therefore is important for the approach to the city architecture. City models and the model-like nature of the city point beyond the peculiarities of the urban landscape and emphasize its thesis-like character.
Just as Benjamin works on concepts, designs and tries out formulations, the film also seeks attitudes and visual perspectives to places relating to environments, centre and periphery. As german philosopher Marcus Steinweg put it: For Benjamin the city is more promise than fact.